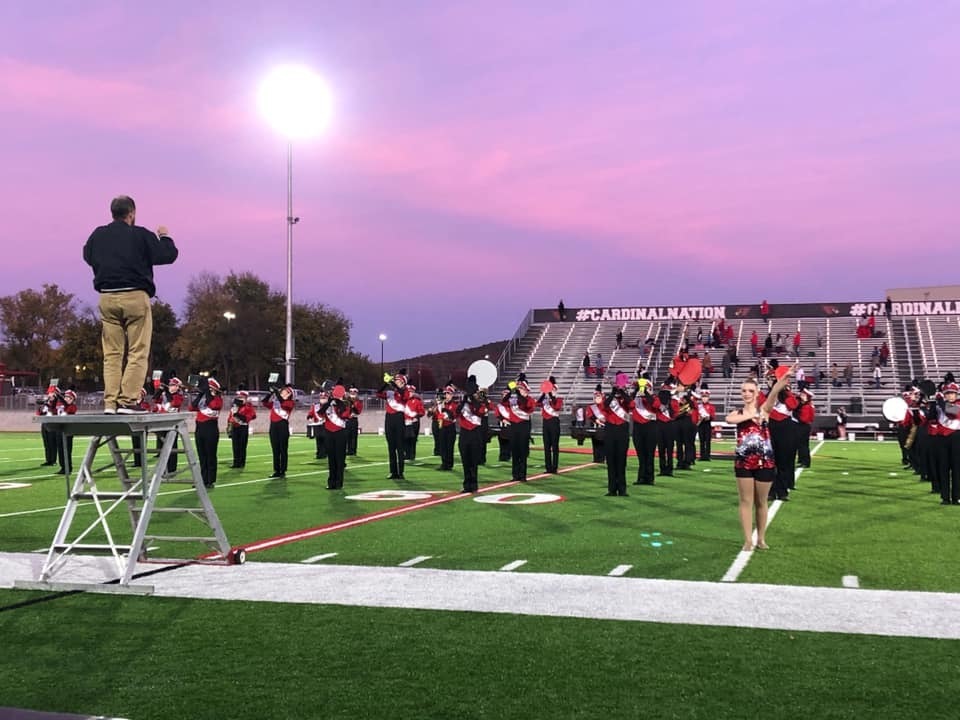 After a long and very unusual marching band season, our very own Farmington Crimson Regiment prepares for their regional marching assessment and final marching show of the year.  They are hoping to come out of assessment with an overall rating of one with their show entitled Secret Agents.  Their show includes the theme song from the TV show Secret Agent Man and the theme from James Bond.

This is a season ripe with challenges across the board.  When we got in contact with band director Jim Spillars to ask him about some of these challenges, he said that he feels that the band’s biggest challenge this year has been a lack of opportunities to play their show music.  He said that the band was not able to play their instruments until the beginning of the school year due to state COVID-19 directives and that they have not been able to travel to away football games where they would have performed their show as well.  The band is down in size this year to 56 members as well.

If the band does score a superior rating at marching assessment, they will receive an invitation to State Marching competition and they will be eligible to win a sweepstakes award later this school year at concert band assessment.  When we asked Mr. Spillars how he felt about the band’s chances at assessment he said, “I feel that the group has risen to the challenge and is succeeding despite the obstacles presented by the situation and I believe that we will have a successful assessment on Tuesday.”

Mr. Spillars also sent out this invitation for the community, “Due to covid, bands that attend the ASBOA (Arkansas School Band and Orchestra Association) regional assessments this year are able to actually perform in their own stadiums.  The teams of adjudicators will be traveling to each school. Our assessment time is Tuesday, October 27 at 5 p.m. in Cardinal Stadium.  The assessment is open to the public and we would really appreciate an audience to perform for. All social distance protocols will need to be followed just as if this were a football game.  Please join us on Tuesday and cheer the band students on as they get to display their hard work.”