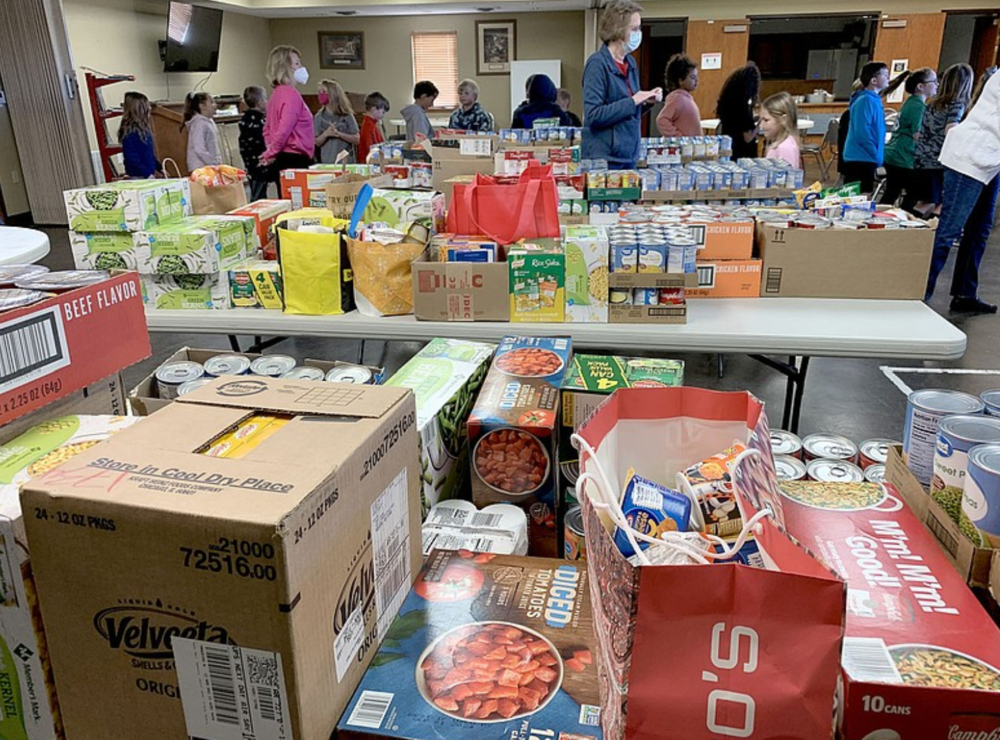 The Los Angeles Rams won the Super Bowl on Feb. 13, but at Williams Elementary School, everyone scored a touchdown in a "Soup-er Bowl Drive" sponsored by the school to help provide food to families in need.

At the end of the week-long "game," students and their families brought in 5,033 cans of food or other nonperishable food items and donated $1,560.

The initial plan had been to donate the items to the food pantry at Farmington United Methodist Church, but the school received so much that counselor Michelle Gooch decided to share the bounty with an emergency community food pantry in Prairie Grove and Cooperative Emergency Outreach in Fayetteville.

Gooch said she was overwhelmed by the response from her students and their families. She created a football field display to show how each class was doing and she never imagined it would turn into such a competition between classes over a week's time.

Because of the response, she decided to add elements to the food drive.

Each day of the week had a game theme to help celebrate the upcoming Super Bowl game and the "Soup-er Bowl Drive." One day, for example, was the Game of Life and students could dress up as their career choice.

"We were all teaming up to help hunger," Gooch said.

She also decided to allow the top two third grade classes to ride on a school bus to deliver the food to the Methodist Church. These students, Gooch said, were able to experience the full circle of their food drive, from seeing all the items donated to the school to delivering them to their final destination.

Mary Jane Silva, a retired Williams' teacher and member of the Methodist Church, gave out kudos to the third graders at the church.

She told them to "always remember this day," noting that successful projects like the food drive do not happen without good teachers and supportive parents and students who are willing to participate.

"I'm over the top overwhelmed," said Jill Simpson, who coordinates the food pantry for the Methodist Church. "We can't do this without community support."

Simpson said she was grateful that students this young are learning about helping others.

Sometimes they see the same families, Simpson said. Other times, it's people coming for their first time because of a need. They may have lost their job or have unexpected expenses, she said.

Several students with the school's EAST program helped Gooch with the project. They promoted the food drive with posters around the school and contacted the church about making donations to the pantry.

Third grader Ryan Noe said he wanted to work on the project to help the homeless and those who are hungry.

"I love helping other people," said Ryan, who worked on the project in his EAST class.

Blake Huebner, also a third grader in EAST, said he went door to door asking his neighbors if they would like to donate to the food drive.

"People around Arkansas are homeless and hungry and can't afford food. We wanted to see if we could help them," Blake said.

Blake said he thought maybe 200 cans of food would be donated to the drive.

Then, he noted, "It became a competition and got out of hand."

Pastor Dee Harper with the Methodist Church said the school's donation is the largest donation the church has received at one time.

"This is wonderful," Harper said. "This is something I've been looking forward to since they said they were going to do it."