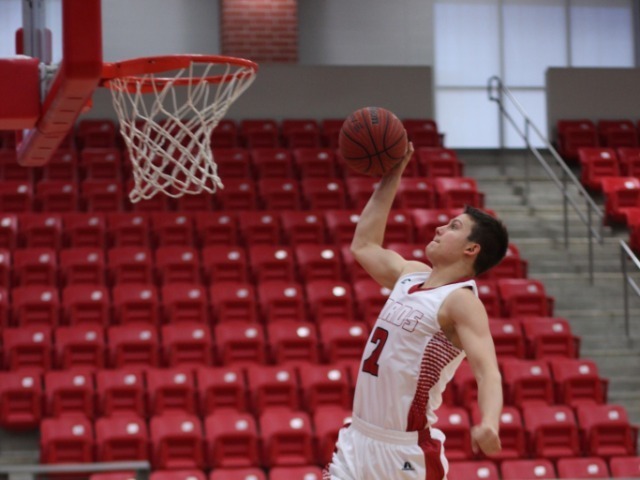 GET OUT OF THE ZONE MAN

STORIES OF THE DECADE: 2010-2019
By Mark Humphrey
Published June 24, 2020 in the Washington County Enterprise-Leader
SPORTS EDITOR’S NOTE: This story is part of an on-going series highlighting top sports stories for the 2010-2019 decade at Farmington High School and its alumni.

FARMINGTON — Opponents quickly discovered the vanity of playing a zone defense against Farmington’s Matt Wilson during his senior season of 2016-2017.

Wilson remembers having his way as he lit up Siloam Springs for 49 points during a Jan. 3, 2017, blended 6A/5A Conference game adopted by the Arkansas Activities Association as a means of reducing travel. That alignment remained in place for two seasons pitting Farmington up against Greenwood, Russellville and Siloam Springs adding to the challenge of an already strong 5A West Conference.

“That was our first conference game in the new conference we were going into. It was the first game of the new year, too; so we wanted to go out there and try and do something special but I wasn’t expecting that to happen that night,” Wilson said. “It was really cool to have all that hard work rewarded.”

Farmington won the tip against Siloam Springs, and with the Panthers laying off, Cardinal fans fully expected Wilson to shoot the ball as soon as he crossed half-court. Wilson didn’t disappoint — draining a deep 3-pointer one step across the timeline.

Wilson replicated the feat on Farmington’s next possession on his way to 49 points, one more than the Panthers’ team total of 48. Coming out onto the floor he knew Siloam’s tendencies and thought he could take advantage.

“They always play that 2-3 zone. They’ve been playing it for years since I was in seventh grade so I knew they were going to be synced back off,” Wilson said. “I knew I was going to be able to step in and shoot it.”

Wilson Hits 50
Jokes circulated around Farmington that Wilson had shot the lights out during one of his habitual shooting practices in the gym when Farmington schools lost power. That gave the locals a few good laughs in days prior to Color’s Day, Jan. 16, 2017.

But Clarksville, Farmington’s opponent during a 5A West Conference boys basketball contest, hardly saw that as a laughing matter.

The lights were back on and Wilson blazed away — knocking down eight 3-point shots on his way to setting a new single-game scoring record at Farmington. Wilson’s prolific point production totaled a career-high 50 points in a 69-58 victory over Clarksville at Cardinal Arena — exceeding the 49 points he scored in a 70-48 victory over Siloam Springs on Jan. 3, 2017.

“That was a little bit different situation because we played before the girls on that night which was something we don’t do all year, and it was really packed from all the people, parents and fans coming to see their kids for Colors Day so there was a lot of people, there was a lot of energy in the gym,” Wilson said. “That was just really fun to play in front of everybody and to have another special night like that, just really blessed.”

Wilson scored all but two of Farmington’s 21 first quarter points. Clarksville guarded him better in the second quarter but he had 25 at the half.

Wilson made it look easy nailing early bombs from well beyond the 3-point arc, but down the stretch he struggled briefly — missing a free throw and a shot near the basket as the game wore down. In the final moments, Wilson stole a pass in the backcourt ending Clarksville’s last possession and quickly drove for a layup drawing crescendos of cheers from Farmington fans witnessing history on Color’s Day.

Wilson knew he was within reach of setting a new school record when he got to 48 points, but it took a feint and extra-effort on defense. Feigning a backpedal on defense Wilson kept his eyes on the in-bounds play and Clarksville’s progression upcourt.

Wilson anticipated a pass and timed his steal perfectly breaking away for what he wanted to be a slam-dunk, but keeping his poise despite a slight bobble and laying the ball in for the basket and the record.

Not Much Zone
At Delta State Wilson won a Gulf South Tournament MVP and used the same work ethic that made him a deadly 3-point shooter in high school to become a defensive force, earning playing time in college. As a college defender Wilson realized right away there wouldn’t be much zone defense.

“In high school we played a majority of zone. My college coach (Jim Boone), he’s only man-to-man (defensively) oriented, so it was a tough transition my freshman year,” Wilson said. “I didn’t get to play a lot at the start. That really helped me focus a lot in becoming a better defensive player so I’d get those extra minutes.”

Hearing his coach express confidence in him motivated Wilson to do the best he could on the defensive end of the court and when Boone left Delta State for UAFS, Wilson also transferred.
“I spent a lot of time doing agility and core work to get my lower half quicker so I could keep in front of some of those guys because in high school a lot of times I was the quickest guy on the court, but it wasn’t like that in college,” Wilson said. “I had to kind of catch back up to some of those guys.”

Gold Standard
When his high school coach, Beau Thompson, was hired as Farmington athletic director during a special school board meeting June 16, Wilson showed up in support.

“You get to coach a kid like that once in your lifetime,” Thompson said. “I was blessed and lucky to luck into that kid. He was a Farmington kid, grew up here his whole life and all he ever did was work hard and get better.”

Thompson considers Wilson part of his family as a frequent guest in the Thompson house, who loves to come eat dinner when they cook.

“He’s going to be an ambassador for Farmington athletics for years to come. I’ve always called him the gold standard ever since he graduated for a reason. He just never does anything wrong,” Thompson said. “All he does is work hard and represent us every game, every day — represent us the right way whether it was at Delta State or now at University of Arkansas-Fort Smith and the sky’s the limit for the kid. This may not be his last year to play.”

Wilson keeps working out a lot getting ready for his senior year, and is taking some summer classes.

Another day in the life of Wilson is simple, “just school, working out, and trying to continue to get better at basketball.”