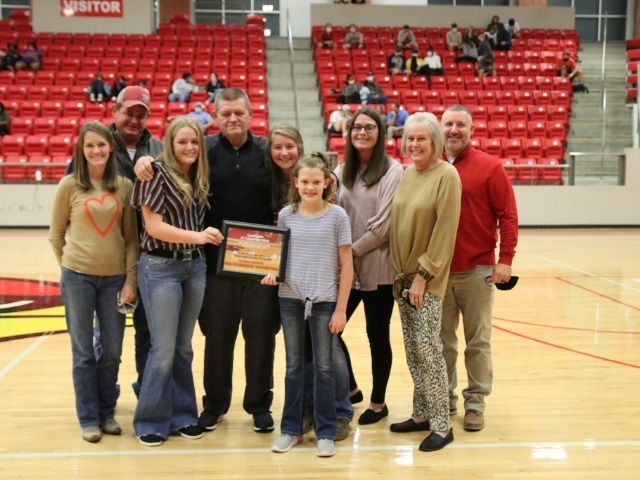 Last Tuesday night, a ceremony was held to dedicate the court at Cardinal Arena to two legends of Farmington Basketball. Coach Ronnie Davis and Coach Brad Blew laid the necessary foundation for a program as successful as ours to flourish.

Coach Brad Blew served as Head Girls Coach, then Athletic Director, for 34 years until his retirement this last spring. During his time, his resume includes 1 state title and 3 state final appearances. He is also a member of the Arkansas High School Coaches Hall of Fame and his name will ever be synonymous with The Farmington Lady Cardinals. Along with former Superintendent Bryan Law, he was the architect of all of the great athletic facilities that you see at Farmington today. But, his records and accomplishments pale in comparison to the lives of former players, staff, and community members that he has impacted.

Coach Ronnie Davis served 37 years as a coach at Farmington. Along with being the head basketball coach for over 20 years, he served almost every other sport in an assistant or head coaching role at one point. Ronnie is from Farmington and his character and commitment to his community is unmatched. His guidance to countless players, students, and coaches over the years has been invaluable. For many years Ronnie was the only figure in Boys Basketball... and he has made a lasting impact on all of the coaches and players that he has touched throughout his long career at Farmington.