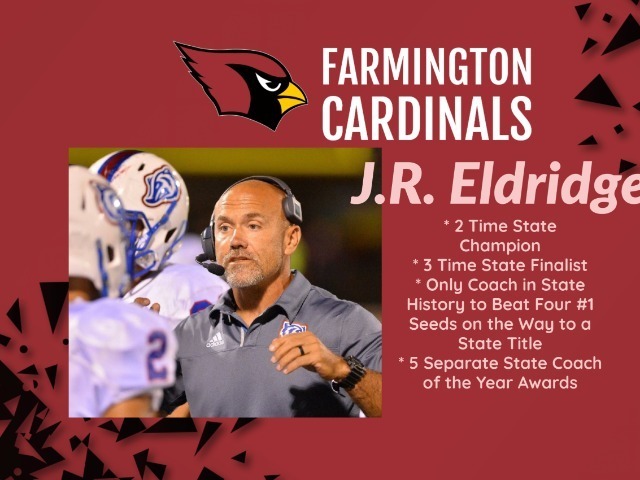 After a thorough process of searching for a new football coach, which included a review of over 40 applications, and a comprehensive interview process of the top applicants, Superintendent Jon Laffoon is pleased to announce J.R. Eldridge as the lone finalist for football coach of the Farmington School District. The Farmington School District Board of Directors will officially vote on the position at its January 25, 2021 meeting. “J.R. has won at every level and will be successful because he is a great leader, but more importantly he is a developer of young people,” Laffoon said.

J.R. currently serves as the head coach of the North Little Rock School District. He earned a bachelor’s degree from Ouachita Baptist University and a master’s from Henderson State. In his 19 years in education, he has served as the Defensive Coordinator and Strength Coordinator at Ouachita Baptist University, the Head Coach of the Arkadelphia Badgers and North Little Rock Charging Wildcats. As a head coach he has three state finals appearances, winning two state titles in 2017 and 2018. In 2018 his team was the only Arkansas State Champion to beat four #1 seeds on their way to the title. He has been named Coach of the Year in Arkansas by the Arkansas Democrat Gazette, Hootens, and the Little Rock Touchdown Club on five different occasions. As a head coach he has a combined record of 93-36 and a playoff record of 22-8.

Coach Eldridge looks forward to working with the students, parents, administrators, staff and community in Farmington. “I am grateful to Mr. Laffoon, Coach Thompson, and the interview committee for choosing me as the candidate who will be presented to the Farmington School Board for the head coach position at Farmington High School. I am excited about the opportunity to make a positive difference in the lives of players, compete for state and conference championships, and build lasting relationships within the Farmington community”, said Eldridge.