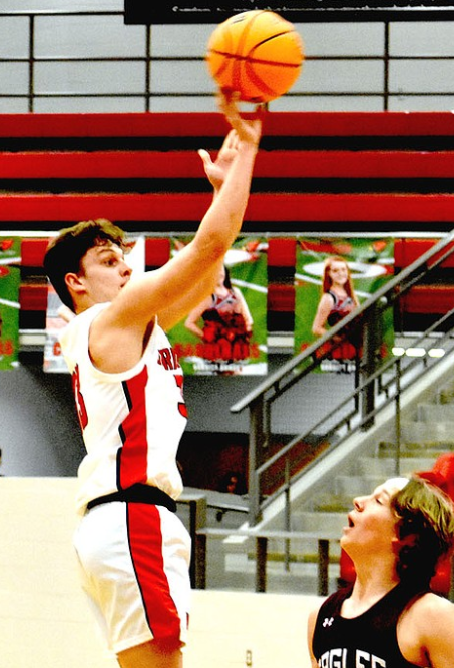 Myrick called timeout in the waning stages of the contest with the school record already in hand and Layne Taylor's total at 59 points. The strategy centered around preventing another basket with 58.4 seconds left and thus keeping Layne Taylor from breaking the 60-point plateau but Farmington coach Johnny Taylor, Layne's father, set up a play with Layne breaking long on an inbounds play.

The 5-feet-10 sophomore guard caught the ball in the open court and his 60th and 61st points of the contest came on what may have been his easiest bucket of the night as the Eagles were caught off-guard and could do little but watch as Layne Taylor drove for a layup.

He made the 61-point outburst which bettered the previous school record of 50 set by Matthew Wilson during a 69-58 Colors Day win over Clarksville on Jan. 13, 2017, seem easy at times.

He made all four of his 3-point shots and 5 of 7 field goals during the third quarter which saw Farmington extend a 43-38 halftime advantage into a 63-50 lead going into the fourth quarter.

"I wasn't really thinking about it. I was just trying to win and my teammates did a good job of finding me. They're the reason I was able to do it," Layne Taylor said.

His father, Johnny Taylor, agreed applauding the Cardinals for deferring to Layne Taylor allowing him to score at will.

"If you don't have great teammates that want you to do that, you don't have that opportunity and we've got such unselfish kids that give him the opportunity to go score," Johnny Taylor said. "It will help us as the year goes on because people are going to more and more open for open threes and open layups because people are going to have to decide: are they going to play us straight up or are they going to send two or three? And when they do he's going to be able to make the right play there, too."

Farmington scored the first 11 points of the period capped by Layne Taylor's wide-open 3-pointer from the wing while trailing a fast break to put the Cardinals up 54-38 at the 5:20 mark of the third. That prompted a Huntsville timeout, but the Eagles faced a serious dilemma -- one they were never able to solve.

Layne Taylor played smart basketball. His 61-point outburst wasn't flamboyant. There was no trash talking after any of Layne Taylor's baskets. The performance exemplified a highly efficient offensive game based on premium shot selection by Taylor and an eagerness from his teammates to help him set a new school record.

The occasional basket by one of the other Cardinals on the court made Huntsville have to guard all five Cardinals. They couldn't effectively double-team Layne Taylor, who never looked like he planned to shoot the ball on every possession and set up his teammates for open looks.

Senior Logan Burch, son of former coach Beau Thompson who's now athletic director, helped immensely with a quiet six points on a pair of 3-pointers. Burch's trey on a cross-court pass by Layne Taylor made it 57-40 midway through the third quarter and served as reminder to the Eagles that he's got range.

"My memories of Matt Wilson, he was a great shooter and a great teammate and both of them are always in the gym. They have the same similarities, they're always in the gym. They're the hardest workers on the team and being on the court tonight with Layne was an awesome experience, just seeing him do his thing and all of us were trying to get him the ball to see him do it and celebrate him," Burch said.

Huntsville battled throughout the game, scoring four straight points to cut the Farmington lead to 13, but they had no answer for Layne Taylor. Luring the Eagles into a momentary lapse with a patient dribble, he exploited an opening and exploded between two defenders, drawing a foul and sinking both free throws.

Scoring Off The Dribble

A bank shot with eight seconds left in the third gave him 43 points and Cardinal fans sensed the record was within reach with the home team leading 65-50. Layne Taylor's most productive quarter came in the fourth when he scored 18 points on 8-of-11 shooting, many inside the paint.

He had a chance to tie the record but he missed the second of two free throws with 4:42 to go before hitting a soft jumper in the key 35 seconds later to surpass Wilson's record with 51 points. That ended a 10-1 Huntsville run which trimmed Farmington's lead to 71-62.

Layne Taylor's baskets beyond that juncture signified icing on the cake, yet were necessary to keep the Eagles at bay. Layne got free and polished off a possession with a driving layup then added to his personal highlight reel by coming across the baseline and making a reverse layup.

That basket and others Layne Taylor was able to get off the dribble excite his little brother, Press Taylor.

"I really liked it when he drove baseline every time and shot a layup," Press Taylor said, expressing confidence in Layne's ability to finish on the reverse layup.

"I knew he was going to make it. He always does," Press Taylor.

Farmington fans starved for some home-court basketball action with the team playing only its second game of the season at Cardinal Arena got quite a treat. That was nice especially after hearing about early season success with the team winning tournaments at Bergman and Blytheville.

"He's a hard worker. He puts his head down. He's coachable. We yell at him, coach him hard, so he's a humble kid. He'll continue to work hard," said assistant coach Will Worthey.

Layne Taylor hit a runner in the lane and baseline shot to reach 59 points that kept Farmington ahead 81-68 with 1:12 to play. Huntsville got free throws from Hayden Dotson, who finished with 31 points with the clock down to 49.2 seconds, and intended to work at containing Layne Taylor but didn't account for him breaking towards the basket at the far end of the gym and catching a long pass on the run.

"The coaching staff, obviously, put me in good spots and the fans I thought they gave us great energy and it was really easy to feed off of them," Layne Taylor said.

According to classmate Jaeden Newsom even in practice the way Layne Taylor works he pushes his teammates to get better and everyone else's confidence goes up and his energy brings the squad up.

"It's a crazy experience watching him go and he's an amazing player. He's an amazing person. He's only going to get better and just watching it is [cool]. People don't get to see it from that point-of-view and it's a privilege," Newsom said.

"I'm proud of him. He works hard. He's a good kid," said his mother, Morgan Taylor.