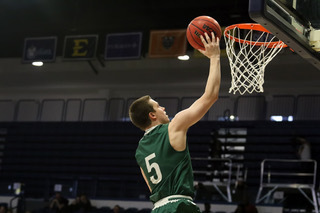 Matthew Wilson, a 2017 graduate of Farmington High School, recently completed one of the most decorated college athletic careers ever by a Cardinal. He began his career at Delta State University in Cleveland, MS under legendary basketball coach Jim Boone. His freshman season he was selected Most Outstanding Player in the Gulf South Conference Tournament, helping to lead his team to the NCAA Division 2 National Tournament.

In 2019, Coach Boone made a career choice that moved him to the University of Arkansas Fort Smith. Wilson was awarded the opportunity to transfer schools with him without penalty, affording him the opportunity to finish his career closer to home. He played 3 seasons at UAFS. This year, his final senior season, he was awarded 1st team All-Lone Star Conference, 1st team All-South Central Region, 2nd team NABC All-District, CoSIDA Academic All-District, and led the Lone Star Conference in scoring at over 20 points per game. His senior year was highlighted by a selection to play in the Reece's Division 2 All-Star Game held in Indianapolis in conjunction with the Division 2 National Finals.

In his career at Farmington, he was a three-time All-State and All-Conference Selection, led the state in scoring his senior year, and was the 2017 KURM Dream Team Player of the Year. He has signed with Duran International Sports Management and plans to continue his basketball career professionally over-seas next year.